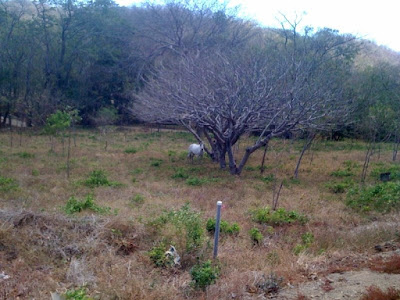 Well this last trip to Nicaragua was one of the best ever. Unforgettable in many ways. I will work backwards from the day I returned home on Sunday, March 15th. I spent Saturday night at Selva Del Mar with Gray and Ryan because my guests at Villa Espiral had arrived that afternoon, so I had to move out.

I woke up at daybreak, a little groggy from the barbeque and Tona fest we had the previous night, but I wanted to hike to the top of Selva Del Mar to see where the sunrise is near the time of the vernal equinox. I want to be mindful of that sunrise location when we design the house for lot 4. Anyway, it was just me and the sounds of birds. The creek was all but empty as it is the heart of dry season. There were a few little fish splashing around in one of the remaining pockets of water just west of the creek crossing.

The wind has blown harder this dry season than any year since I have been coming to Nicaragua. It made the water cold enough for a full wetsuit during the early part of the week, and it blew down several of our trees. This was sad, but it did provide some firewood for open air cooking and barbecuing. Gray had borrowed a chain saw and had already cut a bunch of it up before I arrived on March 8th (Gray's birthday...more on that later).

Still, most of the trees made it through intact and lots of them were blooming. Pink and yellow were the predominant colors. As I walked past Colin's lot, I saw our horse, Filete, grazing there. He's getting a little chubby, being the only grazer at Selva Del Mar. He looked strong, having fully recovered from a horsefight across a barbed wire fence. Apparently both horses were rearing up and throwing punches with their front hooves when Filete caught one of his on the fence and cut his leg badly. Lots of blood. Thankfully Gray and his buddies, Rob, Ben and Ryan showed up and put a T shirt tourniquet on it to stop the bleeding. After some antibiotics and a little healing time, he was as good as new.

In fact, Filete is now in demand! More folks are coming to visit Gigante and some want to rent horses. I talked to Gray yesterday, and he was stoked because he rented out Filete yesterday for $20 per hour to somebody who wanted to ride him on the beach. With Gray, Ryan, Cody and Zach's little beachfront project almost done (more on that later), they will be able to offer their (and our) guests boating, horses, and probably some jet ski's too. Anyway, we are looking at getting more horses! Are you ready to ride horses to a surf spot? I'm going to get a surfboard holster made. Now that's the new frontier!

I brought my video camera for the hike, but ended up running out of battery power before I reached the top, so when I got there, I devoted the location of the sunrise to memory and sat down in the warm light to watch some beautiful hummingbirds feed on the tree flowers. In the distance, I could see that Panga Drops was still way overhead, and looking out toward Pie de Gigante, I could see that the left off the island at the south end of the Bahia was still breaking even though it was high tide.

After the hike and some pancakes, I went down to the beach to see how the boy's beachfront place was coming along. They call their place Olas Gigante. They hope to have it ready for Semana Santa. With their local partner Zacharias Martinez, they have obtained a provisional alcohol permit so it looks like the rum and beer will be flowing for Nicaragua's biggest beach party that starts April 3 and lasts for a week. Semana Santa is definitely party time in Nicaragua. 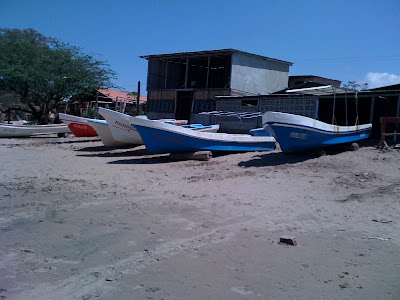 Here is a picture of Olas Gigante. 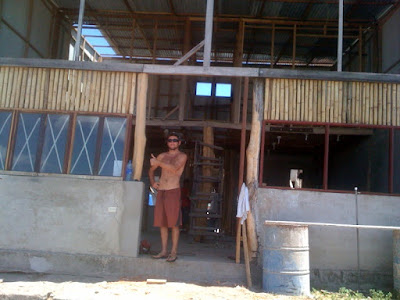 Here is Ryan at the beach entrance to Olas Gigante. Still lots to do, but you don't need everything done to serve beer and rum...right Ryan? 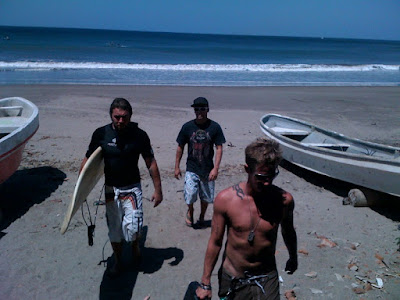 Here is Ben, Rob and Gray, at the entrance of Olas Gigante. Another day at the office.

Being Sunday, the beachgoers were showing up. Buses have now begun bringing folks to Gigante. There were people playing soccer and baseball, setting up umbrellas, and hanging under the trees. Kids were playing in the water and everyone was full of smiles. As I stepped from Ola Gigante's door onto the sand, I could see the left was still breaking off the island, so I walked down there to check the action. On the way, a soccer ball was kicked my way and after an impromptu mini game and handshakes with smiling Nicas, I resumed my stroll to the break. 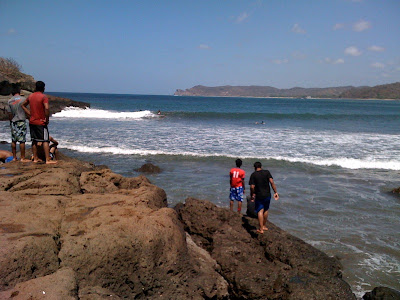 As I approached, I saw Chele pull into a barrel and sit in in it for a couple of seconds as I looked straight in. Then his brother Irwin scored another. What? Tubes off the island? That was a revelation. I had seen some rights spit off the north end of the beach last fall, but now the south end was going off. It reminded me of that part in Endless Summer where people were saying "there are no waves in Tahiti!" Trust me, there are waves in 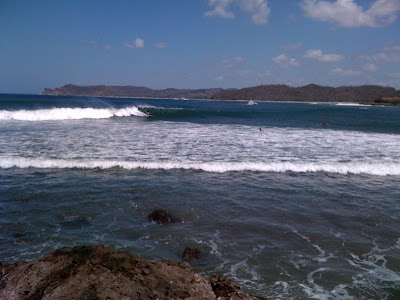 Gigante, as well as nearby. I climbed up the rocks and took some shots with my iphone of Rob and the local boys enjoying chest to head high waves. Here is a two shot sequence of Rob Plath. Notice how it gets hollower as it goes past that rock. It's actually a pretty long wave. 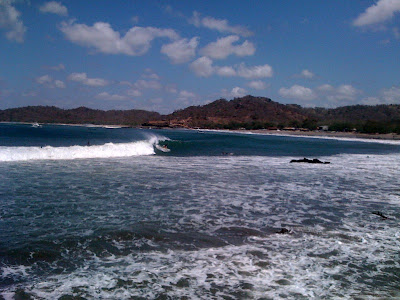 closing out and had broken 6 boards, so I guess the swell had moved enough sand around that it had shape by Sunday morning.

I never even made it to Colorado this trip. Saturday morning saw me out at Rosada on a macking swell. Jan, Paul, Mark, and his friend shared the lineup with me. After pulling into a few barrels and getting heavily caught inside on a few, I decided to come in, catch my breath, get some food and rest 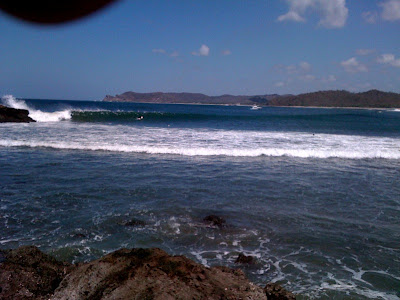 up for a later session.

At low tide, I drove to the checkout spot for a hidden secret spot. I couldn't believe
my eyes! It was huge, breaking a quarter mile out, with perfectly shaped lefts, at least 12 foot. Nobody out, not even on the beach. I called Gray and told him to come over and surf it with me. It was too big to go out alone. By the time the boys arrived two hours later (nothing happens swiftly in Nicaragua), the tide had come up and the size had dropped to about 8 to 10 foot, but it was still empty and good shape. Gray, Ryan, Ben and I surfed it until we were too tired to paddle into them (or get caught inside) anymore. Rob stayed on the beach having already exhausted himself on dozens of long rides in Gigante that morning. That was a session I will never forget. Big, carveable glassy reef break lefts with some standup shacks. Just me, my son and our buddies. Yes, some of the spots can get crowded, but if you know where to look and when...well, it is still a magical place my friends.

Friday the 13th was no less lucky. As soon as the tide started to drop that morning, I made my way down to the beach at Rosada just as Mark Brown was coming off his front steps with his board. Mark, Joe, Paul and I shared the morning session on the rising swell. I was blessed to come out of what was one of the best barrels I have ever ridden there. It's a technical wave and it can warble and pinch while you are in the tube, but this one stayed wide open and dry. I came out hooting my head off (ok I admit it, I also did a two handed "claim"), and paddled back out with an ear to ear grin.

That evening, we had a high tide session at Rosada that reminded me of bull fighting. At high tide, the wave looks deceptively good, and it is, but it breaks really close to the rocks, which usually don't show themselves until right before you jump to your feet. If you don't get pitched right onto dry reef (one guy did and ended up cutting his feet), you find yourself wedged between a heaving double up that is firing down the line and exposed rocks that are just a few feet to the beach side of you. There is no margin for error. It's like being a matador, with the horns missing you by inches while you (try) to look calm and in control. A guy from San Clemente named Shaun was out and he took off as far back as I have seen anyone go at high tide and somehow managed to squeek through. Amazing! Bryan from NSR paddled out and we had a blast sharing some trecherous but very rewarding waves. As I got out of the water, Mark's wife Cathy was waving for me to come up and have a beer with them. So as the sun set, Mark, Cathy, Brian, Heather, their kids and I hung out while we grownups drank beer and wine. Brian and Heather's 5 month baby girl, Safari has the prettiest blue eyes and she just fixed them on me as we sat on their porch and talked story. After watching a great little outer reef video, I walked across the street to Villa Espiral and was soon fast asleep.

Monday through Thursday had smaller surf, but there were some surprisingly good waves at Santana Beachbreak where I got a chance to chat with Tony (from Surf Sanctuary) and thank him for teaming up with NSR to help a little local girl get surgery to repair a cleft palate. We had all pitched in to fund it, and we all just felt grateful to help a fine local family improve the quality of their lives. I encourage all of you to help out too by making donations to the Roberto Clemente Medical Clinic that is just outside the gates of Rancho Santana. They take care of the local community and sew up a lot of surfer's cuts too.

My arrival on March 8th was a classic. I turned on the video camera as I drove into Rancho Santana and pulled into the driveway at Villa Espiral. Gray's birthday party was already in full swing. I am putting together a video of the event, so I will post that soon. But it was a great party that raged into the night. When I woke up the next morning, there were people sleeping everywhere. On the couches, on cushions on the floor. Somebody had pulled two chairs together and was curled up on them. Monday was siesta day for most of the party goers, but I was just too stoked to be there so I was up early, just being grateful how good it can be in Nicaragua. 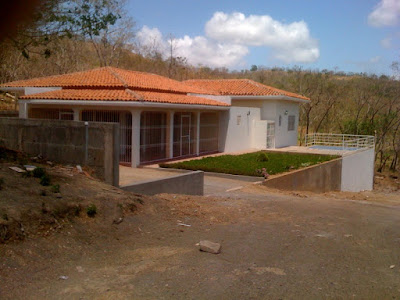 Back at Selva Del Mar, Joe's house is pretty much done now. As soon as I know more about it's rental availability and costs I will let you know.

Until next time, keep the dream alive. It certainly is in Nicaragua.

Lincoln
Posted by Selva Del Mar at 8:20 AM